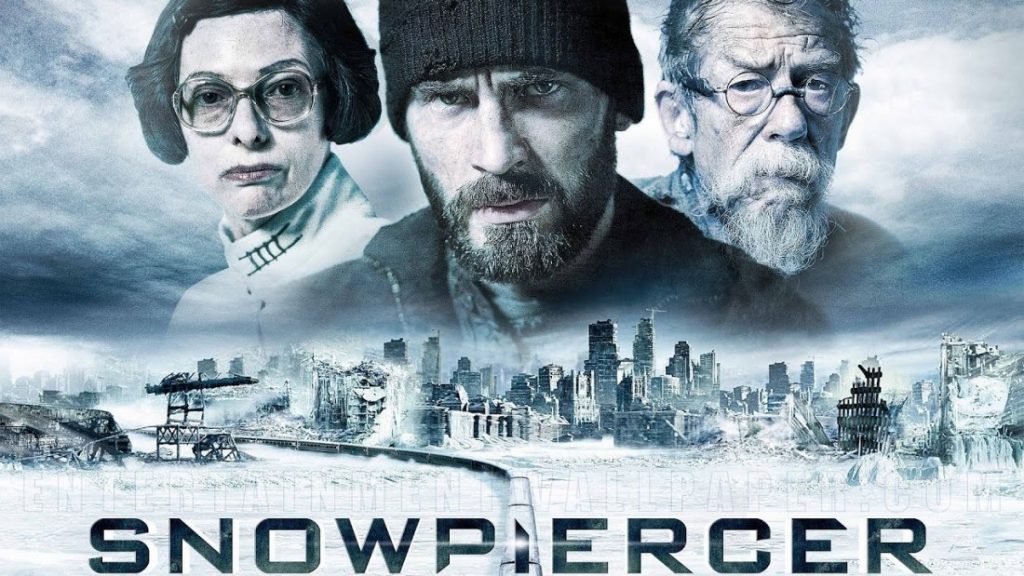 After a global weather crisis the only survivors on Earth are the passengers of a high-speed globe traveling train. A class system emerged on the train between the haves (front of the train) and the have-nots (back of the train).

Had I seen Snowpiercer without any knowledge of the making of the film I would have thought Terry Gilliam had directed it. And I mean this as a very high compliment. Snowpiercer is an art film disguised as a typical summer blockbuster, an orchid in a sea of carnations. Epic in scope, visually stunning, emotionally draining, and at times downright wacky, Snowpiercer is hard to describe and impossible to forget.

The entire film takes place on the Snowpiercer train, a train with a perpetual engine that travels the globe exactly once per year. After a global weather crisis the only surviving living things on Earth are the lucky (questionable) people who purchased tickets on the train before the weather collapse. Alas not everyone was issued the same ticket, some passengers had 1st class tickets, others had steerage. From this initial sorting of humans into different categories a class system is born. Some people belong in the front, some people belong in the back. It is obvious from the beginning of the film that these lines are so rigid the reasons behind the them take on almost religious undertones.

Curtis (Chris Evans), Edgar (Jamie Bell), and Gilliam (John Hurt), are some of the unlucky people in the back of the train. With no privacy, barely enough room to move, filthy surroundings, and a disgusting excuse for food provided to them by the front of the train, the people in steerage are treated like cattle and don’t even have a window to look out of let alone a sense of dignity. Any infraction by the occupants of steerage is swiftly punished by Mason (Tilda Swinton) in a marvelously outrageous villain role. Curtis and Gilliam work on plans for a revolt which depends on the skills of security expert Namgoong Minsoo (Kang ho-Song). Anything said about what happens after Minsoo enters the story could easily spoil the film.

And Snowpiercer is worth seeing with as little information as possible beforehand. For all of the horrific scenes of violence and degradation in the film, there are moments of comedy and sheer wackiness that balance it out. And at its heart Snowpiercer is about balance. The balance of the new eco-system that the occupants of the train have become, the balancing act characters must play out deciding whether to choose their own or another’s survival over the potential survival of many others. Even the trains ability to balance on the same tracks it has traversed for years comes into play in the film.

Snowpiercer raises a lot of questions about how people treat one another in extreme situations and like most films that tackle grand ideas it stumbles a bit in the end trying to wrap it all up. But the journey the film takes is both unique and relatable. Anyone who has ever waited in line in the back of an airplane to use the restroom when the restroom up front in first class is empty has had some experience “learning one’s place” in a small, and luckily temporary, community.

While the setting of Snowpiercer is small everything about the film is large. Characters are loud and brash and borderline crazy in their appearances and mannerisms. The violence in the film might be off-putting to some viewers but I think fits into the general style of the film where everything on the train has been magnified by the circumstances.

All of the actors in the film (especially Tilda Swinton) deserve a lot of credit for making these broad characters fascinating instead of cartoonish. The visuals in the film are breathtaking. The cars in the front of the train are worthy of an Oscar for production and set design and the cinematography is equally impressive.

Even if all of the pieces don’t exactly match up by the end Snowpiercer, it will have you thinking long after you finish watching the film.