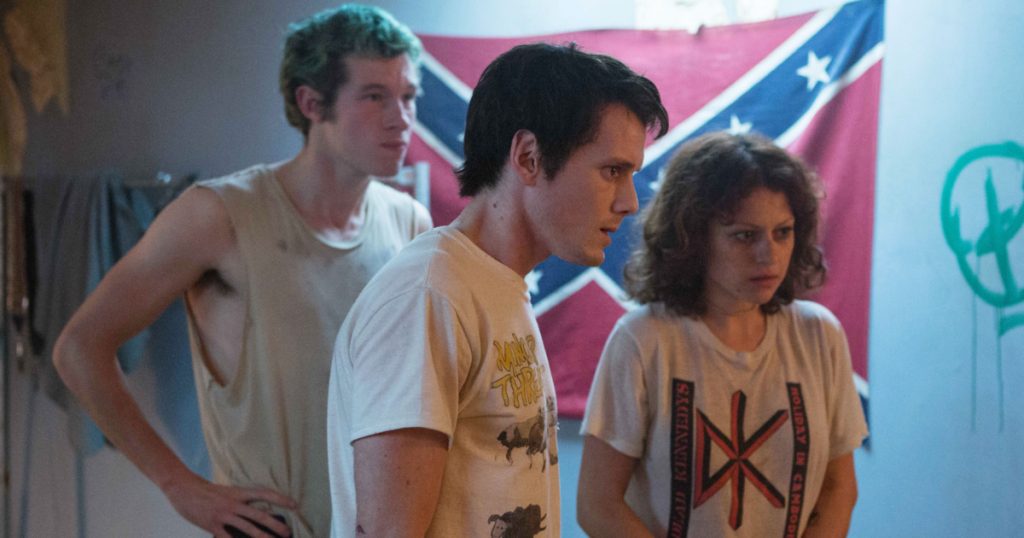 Punk rock thriller “Green Room” focuses more on the intensity fostered by live punk music than it does the actual sound and feeling of being at a punk show. Writer/director Jeremy Saulnier (“Blue Ruin”) explains/apologizes for his general approach to the punk scene in an early scene where fledgling rocker Pat (Anton Yelchin) explains why his band has no social media presence: you have to be at the show to experience what they’re offering, otherwise the “texture” of the music is lost. Pat, an indecisive beta-male who only really comes alive after he witnesses a murder and is subsequently forced to defend his band from militant neo-Nazis, may deliberately sound pretentious. But he makes Saulnier’s point for him. “Green Room” is an overly fussy thriller where dialogue is so direct, and shots are arranged in such a mannered way that you can’t help but be distracted by their precision. This is an intentional flaw in Saulnier’s otherwise flawlessly clean-burning machine. You have to take the bad with the good here: “Green Room” may be too schematic to fully capture the essence of its characters’ groddy milieu, but it’s also economically paced, and gorgeous.

When you first meet Pat and his group, you can’t help but be impressed with how aggressively money-minded they are. They’re not exactly rolling in it, so this makes sense. They share the same phone, talk about gigs with pay rates in mind, and siphon gas from other cars’ tanks as if they were old hands. They even get flustered when a booker interviews them for a college radio gig, and asks them a question as frivolous as “Name your desert island band.” So when Pat accidentally sees a group of skinheads crowded around a dead body, it’s no surprise that he and his group already have one foot out the door. They’re all business, but so are the guys that are out to get them: the Nazi punks that lock Pat and his crew in a graffiti-covered changing room take orders from self-serious club owner Darcy Banker (Patrick Stewart), a guy that describes his club as a “movement, not a party.”

Saulnier frequently reminds viewers that neither his pro- or antagonists are walking ledger books, but rather scared people who happen to be too serious for their own goods. That’s the essence of the punk scene according to “Green Room”: a scene obsessed with authenticity populated by severe, self-made men. Saulnier earns some genuinely admirable, close-to-the-vest laughs whenever characters condescend to each other, like when Pat’s group opens a set with the Dead Kennedys’ “Nazi Punks Fuck Off” and their frontman whimpers “That was a cover” to an unsympathetic crowd of bigots.

Then again, Saulnier mimics his characters’ OCD-level exactitude, and that’s seriously distracting. It’s one thing to focus on characters who treat every run-in like something they will eventually have to provide a list of itemized excuses for. It’s another to film them as if every frame has to represent that compulsive mentality. Saulnier likes his characters’ orderliness a bit too much. These guys count gun shells, investigate their enemies’ pockets, peek under door slates, and do pretty much everything with their mission in mind. Pat’s friends may stumble over their feet sometimes, but watching them talk like they know exactly what they’re doing all the time makes them frequently seem like they’re too high-functioning to live.

Which brings me back to my original point: what kind of movie about punk rockers doesn’t like punk music? Saulnier’s movie uses punk music as background noise: the sounds of feedback, and death-metal growling gets under viewers’ skin on a not-quite-subliminal level since those noises are frequently as loud as any given character’s voice. We also only see Pat’s group perform the above-mentioned cover: this sequence tellingly ends with a group of punks moshing/trampling each other in slow-motion, hip-to-hip and hand-to-shoulder. Saulnier emphasizes the aimless aggression inherent to punk music. And he does a fine job of getting viewers to stay in whatever moment they’re in through a series of engrossing tracking shots and long takes.

But Saulnier doesn’t quite nail his film’s main joke: how can you be young, brash and conscientious at the same time? Saulnier’s game cast—especially Yelchin and “Blue Ruin” star Macon Blair—makes it a little easier to believe these characters might exist within the context of a tongue-in-cheek thriller. But you’ll never believe that Pat and his group could exist in real life. They’re not just wound too tight to be punks, though that’s partly it. These guys just don’t make sense outside of “Green Room.”