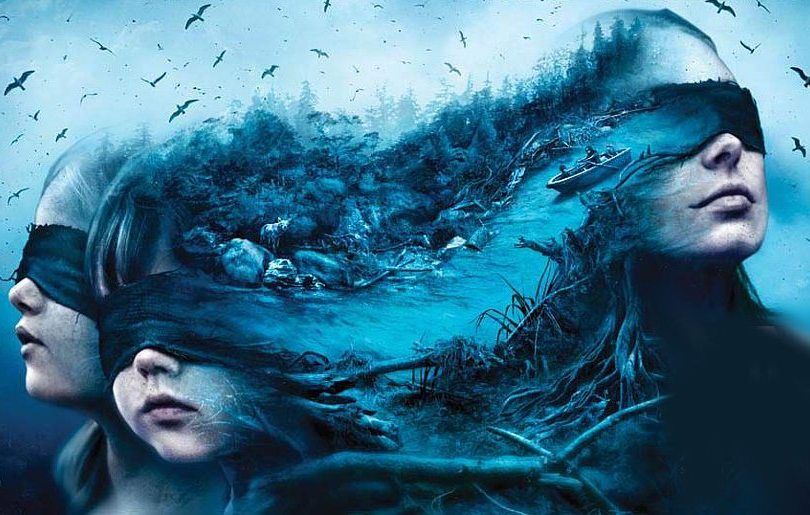 The end of the world is plagued with a sense of déjà vu in Bird Box, a familiar dystopian thriller somewhat redeemed by Sandra Bullock’s emotional performance. Oscar-winning director Susanne Bier (In A Better World) paints a nightmare scenario in which a bizarre contagion sweeps through and destroys most of humanity, the infection seemingly spread simply by looking at those affected. With hints of The Road, A Quiet Place and any number of zombie movies, this Netflix film is appreciably bleak but also sluggish, never fully fleshing out the themes at the story’s core.

Bird Box will receive a limited theatrical run in select US cities starting December 13 before its global launch on Netflix on December 21. Bullock’s star power and the popularity of dystopian fiction will be decent draws, as will a distinguished supporting cast that includes John Malkovich and Jacki Weaver.

Based on Josh Malerman’s novel, the film stars Bullock as Malorie, a desperate woman guiding two children named Boy (Julian Edwards) and Girl (Vivien Lyra Blair) on a dangerous river journey during which they must always wear blindfolds. Soon, Bird Box flashes back to five years ago, as a pregnant Malorie realizes that a terrifying outbreak of mass suicides is occurring across the globe, forcing her to go into hiding with a disparate group of strangers (including a hard-drinking Malkovich, a harried Weaver and a quietly heroic Trevante Rhodes).

Eventually, Malorie and her fellow survivors deduce what has happened: just looking at someone who has succumbed to this mysterious illness provokes insanity and suicide. This plot twist guarantees that Bird Box will have to endure endless comparisons to A Quiet Place, in which making a sound could be fatal.

To be fair, there’s an undeniable anxiety in watching Bier’s helpless characters walk through the movie blindfolded, depriving themselves of sight to stay alive yet vulnerable because they can’t see anything. (Perhaps that’s for the best considering that, apparently, demons are now also running amok on Earth — we hear their disquieting noises off screen.)

But one of the film’s chief problems is that neither storyline is particularly riveting. Despite some white-knuckle sequences — Salvatore Totino’s sickly cinematography gives the proceedings a queasy unease — both timelines are undone by genre clichés and disappointing logical lapses. In the flashbacks, Malorie and her cohorts must board themselves in a house with all the windows shuttered so they don’t risk seeing anything outside — and yet Eric Heisserer’s screenplay keeps inventing phony conflicts and thin excuses for the characters to put themselves at risk. As for the present-day scenes, Malorie’s treacherous voyage isn’t packed with enough surprises, leaving the viewer patiently waiting for a big reveal that will inevitably come at journey’s end.

Still, Bullock exudes a gritty authenticity that makes Malorie worth following. Bird Box wants to say something meaningful about the power of motherhood — in the flashbacks, Malorie expresses ambivalence about having a child, even before mass hysteria hits — but although the character’s change of heart is predictable, the Oscar-winning actress tugs on our heartstrings as she fights to protect these young children.

By comparison, the supporting characters are dull tropes, with Rhodes as a manly, sensitive potential love interest and Malkovich playing the reliably crotchety misanthrope who trusts no one and walks around with a loaded shotgun. Unlike a Night Of The Living Dead, Bird Box doesn’t generate much claustrophobic dread during its flashbacks as the cooped-up characters try to decide what to do next. Even Trent Reznor and Atticus Ross’ angst-y electronic score feels like a faint echo of their earlier, better work.

Often, a dystopian drama uses its despairing setting to explore something elemental about existence — usually exploring the bonds of family or community — but Bird Box is surprisingly simplistic in its thematic undercurrents. Outside of its admiration for mothers, Bier’s film seems to only vaguely hint at other ephemeral ideas, and as a result Bird Box is a curiously hollow experience. One of the reasons such movies are so prevalent is that, perhaps deep down, we all wonder what humanity’s worst-case scenario might look like. Bird Box stumbles blind through this landscape.